At last, signs of Spring! Buds are forming and early flowers are beginning to show through the winter detritus…

The robins have been singing all Winter but now they’re beginning to “up” their game considerably, puffing out their newly-bright chests and bellowing sweetly at all-comers! Short fracas ensue, brief flurries of feathery chase in the bare hedge, the loser retreats a safe distance, the winner sings out his victory and defiance from a high branch: a challenge, a victory bugle,a love song…

The 1st of February, the ancient festival of Imbolc, more recently, St.Brigid’s Day, is traditionally the first day of Spring in Ireland. On the eve, people weave crosses, or triskels (i.e. the more ancient, three-armed crosses) out of rushes and hang them up outside, overnight, for Brigid to bless. These protect the household for the following year. 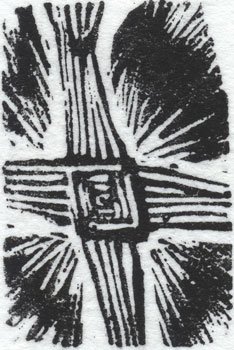 Bending the long spines
sunwise in a squared spiral,
the ancient symbol.