What is wood engraving?
It’s a printing technique in which you engrave or cut a design or image in the end-grain
of a densely grained wood block (boxwood, pear, lemon are traditionally used). The density of the wood allows for extremely fine incisions and great detail. The finished block is then inked, paper is placed on top and the image is transferred from the block to the paper by applying pressure. Peeling off the paper is one of the magical moments in art as you see for the first time how successful (or otherwise!) your print is. 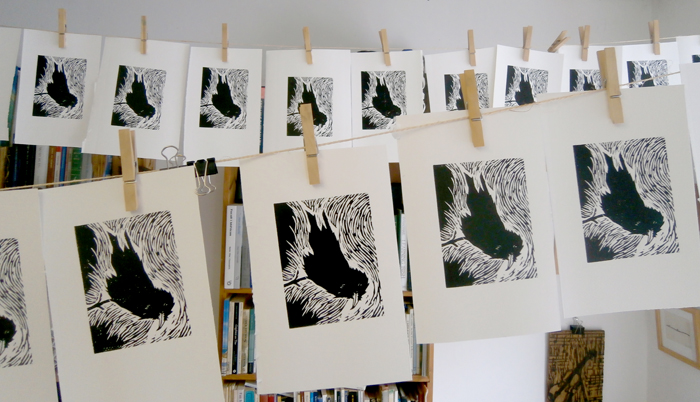 A little bit of history.
The earliest known works of visual expression by humans are engravings, dating as far back as 30,000 BC. Printing using wood blocks probably originated in China as early as the seventh century.

From the fourteenth century, it became a widespread medium in Europe and remained the principal form of illustration up to the late nineteenth century. From the beginning of the twentieth century, wood engraving began to take on a creative aspect that led to its evolution as an art form in its own right.

One of my heroes is Corkman, Robert Gibbings (1889 – 1958) founder of the Society of Wood Engravers and prolific and highly skilled engraver. One of his tenets with which I agee is the importance of illustration as an integral part of book design. I intend and plan to produce illustrated books featuring wood engravings – watch this space!

See samples of my work here. And a step-by-step wood engraving tutorial here.